Research Insight: Hope for videogame addicts – and their parents? 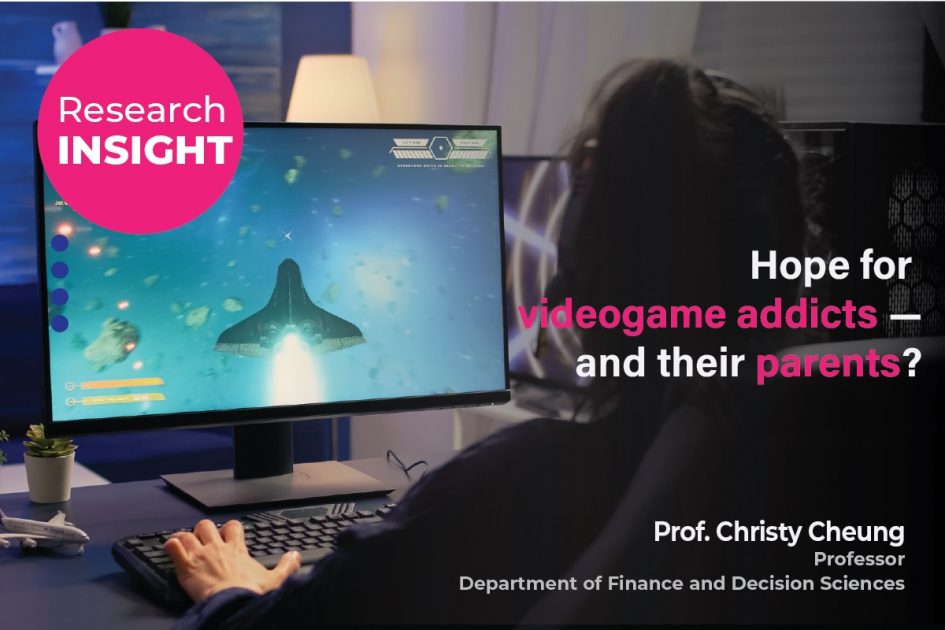 It’s a truism to say that “massively multiplayer online role-playing game” (MMORPGs) can be addictive. We all know gamers who lost in immersive virtual worlds spend hours customising characters and chatting with other gamers as they seek to level up. Can the madness be stopped?

Using data from 406 US-based players of World of Warcraft (with over 7 million active players, WoW is one of the world’s most popular MMORPGs) to explore how such games fuel addiction, a recent paper by Prof. Christy Cheung and her two former Ph.D students (Dr. Zach Lee and Dr. Tommy Chan) offers game developers and policymakers some suggestions about preventing MMORPG addiction while maintaining an entertaining and healthy virtual playground.

Building on insights from the hedonic management model of addiction, the researchers investigated how technology amplifies MMORPG’s addictive potential via a process called Technology Affordance i.e. the ability of technology to satisfy our internal reward system by empowering users to execute goal-orientated actions.

Like many addictive substances, MMORPGs can impact the mood of players, both positively and negatively. For example, the use of reward schedules—wherein players get something for completing a task— encourages gaming by delivering feelings of achievement. Meanwhile, many players get immersed in MMORPGs to cope with the negative aspects of their lives. At the same time, technology can help augment these feelings. Since sharing knowledge like an exciting news item with tools like email and social media has been shown to trigger feelings of elevated status in addition to fuelling competition, it’s not surprising that the same does occur with gaming. Indeed, both achievements and immersion – in addition to feed the reward cycle predicted by the hedonic model – correlate directly with MMORPG addiction, especially for younger and less experienced gamers.

Game developers could reduce the thrill of achievement by introducing Voluntary Fatigue Systems to make it harder to gain points once a gamer exceeds a daily time limit. As rewards get harder to come by, players may decide to stop playing until the next day. The appeal of immersion could also be mitigated by letting gamers limit the amount of time they spent online daily.

Since these features might reduce players’ satisfaction and impact revenues – something game developers are addicted to – it may be wishful thinking to rely on the industry’s goodwill and gamers’ self-control (especially for younger gamers). Thus, a brave new world of MMORPG might require regulations that, like South Korea’s “Youth Protection Revision Act”, set daily time limits for gamers below a certain age. If not over, the game might be up for some developers!

Theme by Anders Noren — Up ↑