Research Insight: How to prevent cyberbullying from rearing its ugly head in universities 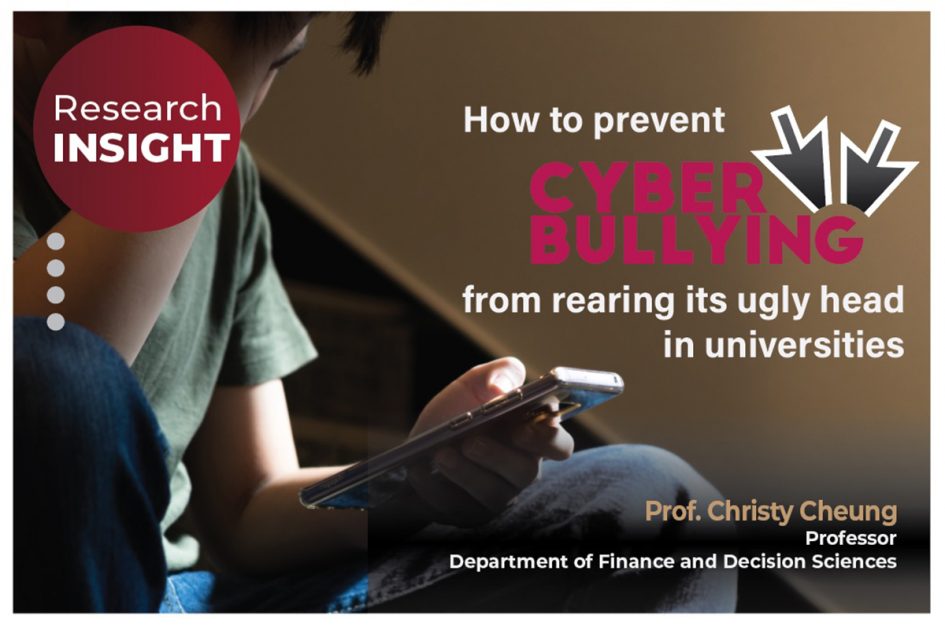 We see many varied examples and incidents of cyberbullying around the world. As many students enter their second year of online schooling, it’s an even more important, timely topic, especially for the younger generation. Because they all live with this technology, the first thing they do when they wake up is check social media. With increasingly online lifestyles, cyberbullying can take on many different forms.

A step beyond cyberbullying, cybermobbing differs in that it encourages coordinated deviated group behaviour. It involves motivating others to actively harm another group together – that’s one of its tactics. Another cybermobbing tactic is “naming and shaming”, also known as doxing or “human flesh search” in China, in which the victim’s personal identity or contact details are released to the public, leaving them vulnerable to harassment, stalking and other abuse.

The emergence of this particularly cruel and insidious form of cyberbullying poses a serious threat to internet users, platform owners and society. Cybermobbing has more serious adverse consequences than cyberbullying does because victims experience multiple offences from groups of people, making it difficult for them to fight back. In addition, the insulting and manipulative posts used in cybermobbing provoke a flood of angry responses, resulting in a polarised society.

How online behaviour can cross the line and become toxic

Cyberbullying is not going away any time soon, so I have been studying how to use technology to mitigate or combat this problem. I believe the goal is not to control, but to educate, as everyone needs to better understand online mental health.

For example, in my course on “IT and society”, I bring research insight into the classroom, creating hypothetical posts in which a victim was taunted for their appearance such as being overweight. In Asia, there is very little awareness of sizeism and its harmful effects – many people consider it normal to make unsolicited comments on weight. They don’t realise that what they are saying is harmful to the target, or they downplay it as oversensitivity. This is partly because it’s considered to be such common behaviour, and people feel comfortable making such comments, even more so online and especially if the target is a stranger.

Most students don’t realise that it’s a problem to participate in mechanisms that contribute to cyberbullying. It’s a joke to them and they feel there’s no harm in liking a seemingly harmless “funny” post or making a light-hearted and sarcastic comment. But once you like or share that post, the algorithms used in social media amplify it based on your engagement, making that post appear more and more often and helping it gather momentum and attract attention. That means that you are indirectly helping the bully, no matter what your original intentions may have been.

Steps universities can all take

With this in mind, universities and academics have a role to play in establishing a culture that seeks to proactively prevent cyberbullying.

From defining inappropriate online conduct to establishing steps to report and respond to cyberbullying, university administration, guidance counsellors and teachers will feel more confident addressing the topic when there is a system in place with a clear response framework to any incidents that do arise.

In both online and offline classrooms, teachers can help students become more aware of what constitutes cyberbullying, its seriousness and what to do whenever it may occur. They can consider designing and role-playing relatable everyday scenarios to generate productive conversations that challenge students to reflect on bullying behaviours.

They can also incorporate empathy training in classroom activities and guide students to look at the situation from the perspective of the person involved.

Teachers should be proactive when they notice changes in student behaviour, demeanour or performance as these can all be signs of cyberbullying taking a toll.

Engage students and their creativity to promote cyberbullying awareness on social media – task students with designing anti-cyberbullying content and make sure the messages are amplified to spread positivity.

Introduce the design principles such as design for empathy, design for attention and design for consequences, and then engage students in design interventions in classroom activities that would discourage or prevent cyberbullying or cybermobbing behaviours.

Students should be educated on how to mindfully use social media as well as to better understand the lasting impact of online posts and the digital footprint they are making. Parents need to also be aware of cyberbullying and establish the importance of responsible online practices with their children.

With this holistic approach and a tangible support system that reinforces prevention and confronts cyberbullying, students can feel better equipped to handle any online abuse they may encounter in the future.

The original article was published on THE Campus:
https://www.timeshighereducation.com/campus/how-prevent-cyberbullying-rearing-its-ugly-head-universities

Theme by Anders Noren — Up ↑